The project is funded by the Czech Science Foundation’s grant No. 19-10694S and is based at the Faculty of Science, Masaryk University, Brno and Faculty of Economics, University of South Bohemia in České Budějovice.

Neither Poor nor Cool: Practising Food Self-Provisioning in Allotment Gardens in the Netherlands and Czechia 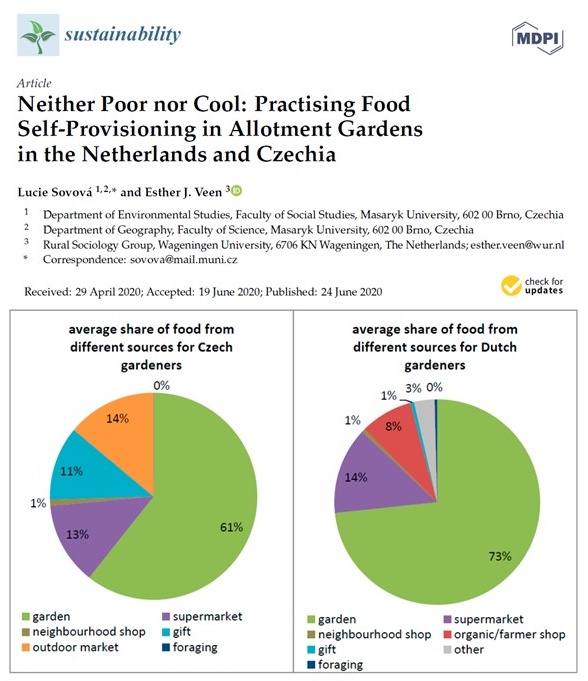 Abstract
While urban gardening and food provisioning have become well-established subjects of academic inquiry, these practices are given different meanings depending on where they are performed. In this paper, we scrutinise different framings used in the literature on food self-provisioning in Eastern and Western Europe. In the Western context, food self-provisioning is often mentioned alongside other alternative food networks and implicitly framed as an activist practice. In comparison, food self-provisioning in Central and Eastern Europe has until recently been portrayed as a coping strategy motivated by economic needs and underdeveloped markets. Our research used two case studies of allotment gardening from both Western and Eastern Europe to investigate the legitimacy of the diverse framings these practices have received in the literature. Drawing on social practice theory, we examined the meanings of food self-provisioning for allotment gardeners in Czechia and the Netherlands, as well as the material manifestations of this practice. We conclude that, despite minor differences, allotment gardeners in both countries are essentially ‘doing the same thing.’ We thus argue that assuming differences based on different contexts is too simplistic, as are the binary categories of ‘activist alternative’ versus ‘economic need.’